I've been busy putting together the art show that I have next month. I have to take it all in the gallery next weekend and then the curator will determine which of my paintings will be seen. He told me to bring 'around 30' and I have 32 of them. I think they are representative of my best work. They go from 4"x4" to 3'x4' and everything in between. I have some paintings that are quite linear. Lines and angles. Then I have others that are clouds and swirls of color on top of color. 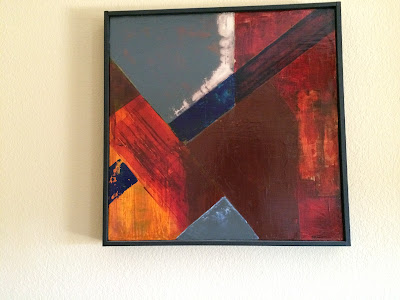 This is one that shows you what I mean when I say 'linear'. 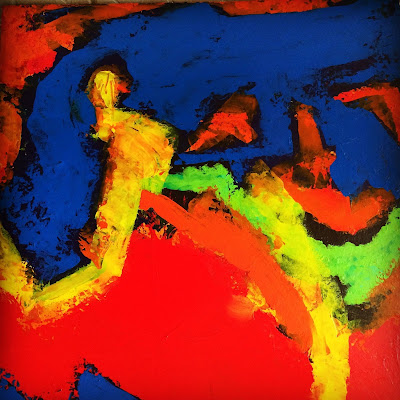 Here's some color exploding. They are both 2'x2' and acrylic. One is painted on canvas and the other on birch plywood.

I am expected to give a 1-2 minute talk about my art at the reception. That is going to be hard to do!
With my other ASD, Autism Spectrum Disorder, I don't do well at receptions or public speaking.

With all my canvases finished and cataloged I am suddenly bored. I've been able to go out to my studio and paint almost every day as I made sure I had enough of my work ready to show. I don't have any more large canvases and that is what I desire...I guess I better get used to painting small for awhile, I have half a dozen blank 16x20 canvases, just waiting for some paint.

A week or two later.

It's been a while since my surgery and I'm pretty much recovered from that trauma. I do have two new scars decorating my back now. The scars are not quite as ugly as they were. When I see how far he had to cut down my spine to release the cable I want to say 'ouch'.

With the surgery out of the way I am back to the same old pain that I had before the surgery. That was expected. I will meet with my surgeon next week and he will order an MRI for me and then discuss the plans for going forward to obtain the pain relief. And with the same pain I end up with the pain relief problems that I had. More Norco and more Dilaudid. The pain comes and goes as usual. Yesterday was a zero Norco day while the day before I needed 4 of them plus 2 Dilaudid. Today it's 2 Norco and it's not quite noon.

I'm really interested in what my surgeon will recommend for pain relief once the diagnosis of ASD is confirmed. (ASD is Adjacent Segment Disease or Deterioration) Googling ASD gives me a lot of information. 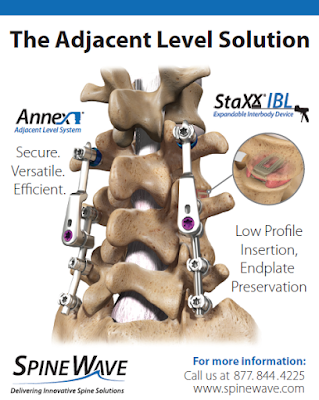 Here's one that will give me a lot more metal to deal with; though I do admire the high tech look of it. 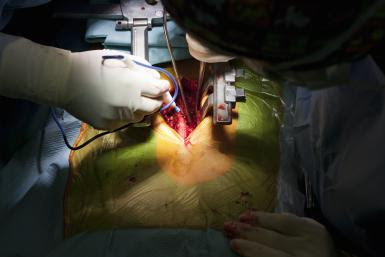 This is all too familiar...been there, done that. 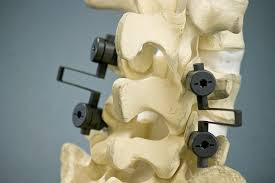 This one looks like the simplest. But I have to wonder about the life of the springs?

I hope these images don't bother anyone. I'm very much used to seeing things like this. Back in the day, when I was a Navy Hospital Corpsman, I worked for Cmdr Rolf Noer, a Navy neurosurgeon as well as an orthopedic surgeon. Back in those days a surgeon could have both boards. Anyway, we were all quite familiar with the contents of his black bag; saws, chisels, files, screws, nails and etc. His tools would fit right in to a carpenters tool box.

The 15th has come and gone and gone is the battery and cable that goes with a spinal cord stimulator; it didn't go easily. The surgeon, Dr. Mimbs, told my wife that the cable had gone through the foramen and that it had become embedded in the spinal structure. The 15 minute surgery turned into a 1 hour one. The outcome was the same except for the added after surgery pain because he had to cut and saw and chisel the cable loose. The surgery that was going to let me go home directly afterwards now hit a snag. I was told that I could go home as soon as I peed. My body doesn't do well with demands and and after a couple of hours went by it was obvious it wasn't going to comply and so I was admitted to the hospital and I no longer had a voice in what was to happen. It did happen, painlessly, and I was soon anchored to the bed.

Nice hospital. Great nursing care. the food was blander than bland. All in all, I could not complain at all. I have Medicare and supplemental insurance and so I did not have to worry. Back in the 60's and 70's all the medical needs were met by affordable insurance. I was in the Carpenter's Union and we had negotiated a contract with our employers that included health insurance. I had Blue Cross and the hospital charge for my wife's pregnancy was $0.00.  I was also a contractor during this time and I included the cost for the insurance in my bid for a job. The system worked.

Now, for some reason, unions are portrayed as being greedy and evil, usually by people who have never been in a union. Health insurance costs have gone through the roof and no one wants to pay for them or try to rein them in. We're just lucky that we are living at this time and have the ability to pay. We'll be gone soon, but for those that have a generation or two to stay here on earth, these costs are killing them and our nation. Don't we all deserve medical care?

Anyway, the catheter came out on Sunday and  I complied with their request to pee this time and was allowed to go home; where the pain of the surgery is very uncomfortable but I have more drugs to take care of that. In the meantime, I wander about, cane in hand, as I try to remember why it is that I am wandering... could it be the drugs? Ya think!

I've been to see my surgeon and signed off on the work he is going to do on the 15th. Then, he sat down and smiled, saying "I know what's wrong with you!" I must have looked confused, so he repeated it, adding "I know what's been causing this pain. You have ASD; Adjacent Segment Disease (or Degeneration)." He then told us all about ASD and as he did, I saw it clearly. Yes, that is what has been causing this. He was happy because he had identified the problem and I was happy because I now knew what the problem was. We didn't talk about 'cures' or what the course of action will be. That is for after the surgery because after the surgery he can use an MRI to see the problem in detail. The metal in my back has precluded the use of the MRI. I really like this surgeon; after telling us all about ASD, he sat there for another ten minutes while he told us funny stories of things he had been asked to do when he was a resident. We were all laughing.

That same day, I had been to see my neurologist and told him about the surgery to remove the offending metal trash from my back. He was delighted because he could now have an MRI brain scan, (of my brain) with and without contrast. He ordered one for early March. If he's happy, I'm happy.

The art world is waiting with bated breath for the opening of my art show. I wish. Truth is, the opening day is creeping closer all of the time and I continue to paint large. I now have paint on three 30"x48" canvases. None are complete but they are close. I now have 32 paintings ready to show and 4 that are just a few days away from completion. I just need to stay away from Aaron Bros. Art store and the one cent sales or their 'three for the price of one' sales. After this show is over, I will then look forward to a 'three for the price of one' sale. I am now over my fear of larger canvas. I want some canvas such as 40"x60".  That's almost four feet by five feet. I don't know what I will do three canvases that size, really I don't. But I need to paint some! There is one place in our house that will take a canvas that size, just one. I could swap the paintings in and out every four months.  Good idea!

I think I will post photos of the show paintings on our Tuesday Painters web site.

Back to my back. I did look up some of the fixes for ASD and they all require surgery. That doesn't bother me. Dr. Mimbs is the very best! Most of the fixes install a hinge of some sort just above the fused vertebra. I really need to get rid of the pain as I'm getting very tired of the side effects of the morphine and morphine Norco mix. I talk to myself. I drop things. I space out and my memory can't get much worse.

I realized the other day that I have ASD twice. I have one for my back and one for myself as I have Autism Spectrum Disorder and that defines me. Between the surgery and the art show, my autism is being challenged to stay in the background. I don't use the telephone so that is a challenge. My telephone is really my camera and photo file mover. I don't like being touched and I had a pre-surgery exam the other day that wasn't pleasant. I'll get through it; I always do.

I just came away from a conversation about 'The British'. I was telling my wife that it looked as if the return of Downton Abbey was all over the internet. And she noted that it was odd that there was such an interest in all things British these days. (We've been watching Broadchurch and a host of others like it on Netflix) Then I told her that, growing up, I saw lots of British films. She was amazed. I explained that my mother had been the reason for that interest, as she was a real fan of Sir Alec Guinness, he of the Lavender Hill Mob. She would take me to see all of his films. And all other British films. Or, I should say, all of the films that made a rare appearance at an out of the way and tiny theater, like the LaMar, in Manhattan Beach.  I also explained to her that as a 9 or 10 year old, I was awed by the gong(er) at the beginning of all J. Arthur Rank films. She had never heard of such a thing. Then, I remembered, she was not the only one that gave me a blank look when I mentioned the 'Gong'. Friends of mine, over the years, had said they had never heard of J. Arthur Rank. So, for all who've never heard or seen the "Gong', I found it on YouTube (of course) and embedded it here for you to play it as many times, or not, as you want. Enjoy!