it's always greener on the other side of the fence 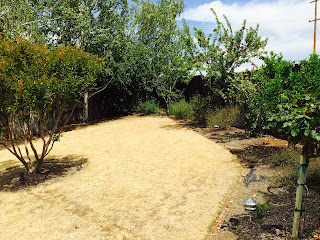 There it is, proof about that old adage. I know for a fact that the grass is greener on the other side. My front lawn is definitely greener than this desert. (but it is on a downward spiral) Luckily, the drip system will keep the trees and shrubs from dying.

I'm not going to look at prior postings to find the answer to that question, I'm just going continue on as if everything was normal. It isn't but I will try and tell myself that. This short term memory loss is very frustrating. It seems to have come on suddenly but with my memory, who knows when it started.

I took a moment to step outside, take a picture, come back in and post it to this blog. That's what I love about technology. Technology creates things that helps us all; from the highly scientific world to the mere social networks. Yes, I know it takes jobs away, but at the same time it creates jobs for those who were learning to exist in this advanced age. It has always been this way. I was lucky; my career in construction was never in jeopardy, it only became more productive with new technology. And building high-rises will always require human bodies and minds.

Let the sunshine in

The weather is getting warmer here. We're hitting the high 80's this week and we'll be seeing the high 90's within a few weeks. And with the high temps will come the fires. It's almost guaranteed; all we need is a north wind combined with high temps and the firebugs crawl out from the rocks to do their best to destroy all they can.

The bad news around here is that we have to conserve water at a greater than expected rate. Because this area was consuming water at a higher than average rate, we are expected to cut back by almost 1/3; 32% to be exact. Well, the back lawn is gone now and we've cut back on flushing. The front yard is looking less than lush. It probably looks bad enough to keep the self appointed 'water vigilantes' at bay.

A few more weeks and water worries will be memories for 13 days as we travel down the Oregon coast with my sister and brother in law.

The time I spend with the rehab therapists is not doing much. The pains and singular neuropathy come and go unpredictably. The surgeon that did the first two surgeries told me that I would probably have to live with the results. He removed the crippling pain and for that I'm grateful. I will be seeing the neurologist next Friday with hopes of solving the balance issues...and the neuropathy. Marijuana will be the next and probably last hope for finding a pain stopper that doesn't have all the side effects that the legal opioids have.

We decided to join the many neighbors around here by installing a solar power system. The process began today when measurements , photos and angle of the sun were taken and recorded. It takes about 2 months for the whole process and after it is complete, a switch is thrown and my electric meter will begin to turn in the opposite direction while I sell electricity to the power company. I will have a 20 year lease on the system and since I'm almost 75 now, the chances of my seeing the end of the lease are pretty slim. But I can hope! In the meantime, my lease costs me $149 a month and twenty years from now it will still be $149 a month.

Solar power installation in California is 14% ahead of the nation with 3 dedicated solar power plants in the desert south of here. 23 states still have no solar power utilities and no plans to build any. Solar cells are popping up on roofs all around here and the power companies and their stockholders are getting nervous. But where were they when it became apparent that solar power was viable? Heads were in the sand.
Posted by Steven at 5/29/2015 10:02:00 PM No comments:

It's quiet around here today. We went shopping early, 9:00 AM, and it was apparent that those who were going to celebrate the day were still sound asleep. That's a bad choice of words isn't it? "Celebrate the day". But, that is what will happen today. The fairgrounds are ready for a crowd on this last day of the fair.  With all of this sunshine there will be plenty of barbecues going this afternoon.

Some people that will not be 'celebrating' can be found at the downtown Plaza. Laying on the grass with a bedroll for a pillow. Some will have a dog with them. I know of another that has a cat that stays on his shoulder when traveling. Some will be drunk. Most all will be hungry - and sick. I know some of the veterans that are living rough, here, on the Plaza that has a large memorial to honor veterans at one end. Clyde is one of those veterans; Marine Corps in Vietnam. He has a dog and a guitar and a cup for donations. He also has a wheelchair. He had back surgery at a VA hospital in Sacramento not too long ago. He was discharged back onto the streets. He made it back to Chico and reclaimed his dog from friends. Now he sits and plays and talks. The police will come by every few hours and roust every one of them and the Plaza will be empty. It will fill back up again. Then the police will come. It's like a dance...

Back in the day; I was in the Navy for no good reason other than the fact that I was bored. Three of us joined together so that we could endure boot camp with a friend alongside. Two of us went to Hospital Corps School and our friend went to Electronics School. After graduation and now a Hospitalman, I was sent to Camp Lejeune, NC. North Carolina was not a good place to be in the late 50's and early 60's. And Camp Lejeune, home of the Second Marine Division, was not exactly a welcoming home for a sailor.

Once on base and working at the Naval Hospital, I learned some basic safety rules; never wear your uniform off base and never go to J-ville (Jacksonville) alone. Navy or Marine; we weren't welcome. And if you were a Black sailor or Marine, you might as well stay on base.

During my time there, there were at least four 'World Crisis' alerts that closed the base to all traffic and had the 6th Marine Regiment, our neighbors, out onto the beach and ready to board Navy troop transport ships. Twice, they actually boarded and set sail, only to return a few days later. Everyone was becoming interested in world affairs as it was obvious that 'peace time' was coming to a close.

Near the end of my tour of duty, the officer in charge of re-enlistment summoned me to his office. I  wasn't surprised and I had already made some inquiries into various schools that were available for someone that re-enlisted. We met and he told me about the STAR program, Selective Training And Re-enlistment. The Navy would pay me some great amount of money and send me to any school I wanted as long as I signed up for another six years. I wanted to do it and I had already decided on the Aviation Medicine School at Pensacola. Then I asked if I would be assured that I wouldn't have to stay at Lejeune, normally a four year duty station. I had only served two years there and wanted out! He reluctantly told me that he couldn't guarantee that but I shouldn't worry about it. Well, I was worried, as I wanted out. And I knew that if I stayed I would be put into the FMF which is where you get to learn battlefield medicine and other fun things. You even get a new seabag, filled with Marine Corps uniforms, just for you. The enlistment officer and I had several more meetings with the same results. So I left the active duty Navy and become  Reserve; at home. It was October of 1961.

Unknown to most of America, the war in Vietnam was just starting to heat up. It was known at Camp Lejeune. And in 1965, when I was given my final discharge papers, that war had indeed become very warm. I had made  the right choice when I gave up the school and re-enlistment bonus money. Blessed is a good word for that.

It has been close to a month since the last time I posted here and during that time I have visited with my new neurologist - new to me -and found him to have great skill in developing a good patient/doctor relationship. I like him. He has a clinical psychologist in his office and she assured me that my memory problems were absolutely normal for my age and I didn't need to worry about dementia or Alzheimer's. I will be seeing him again in a few weeks to find out the results from the blood tests he had ordered for me.

In the meantime I have been going to the rehab center where a physical therapist pummels me into submission each time we meet. He says he's loosening up my hip. I hope it works!

I completed a 5K walk a few weeks ago and got my t-shirt. Did it 1:10 faster than the last one. And I didn't fall over; a good thing. The balance problems don't seem to strike when I'm walking somewhat straight. It's only when I turn my head quickly. So, I didn't look back to see who was close to me as the finish line came into sight.

The local art center, where I meet with 8 other artists on Tuesdays, puts out a newsletter every month and each issue spotlights a local artist. The next months issue will feature me and my art. Another local artist came over to interview me and take photos of my work for the newsletter. I think I'm the first featured artist that is an abstract expressionist.

Memories; Mrs. Burt, my seventh grade teacher at Pacific Ave. school in Manhattan Beach. She was flamboyant to say the least. She wore red dresses and bright red lipstick. Her hair was long and black and she loved life; it was so evident! She was also my salvation. She recognized that I was quite bored with class work. I really did "know it all" and was tired of having to listen to lessons about things I already knew about. So she rescued me by having me become the school AV expert and I would go from class to class and setup the projector and the screen and then show movies. Once the film was running, I could step outside the classroom and read the books I enjoyed. Then she made me  a 'Hall Monitor'; a position that allowed me to be outside the classroom for at least 15 minutes for each period. But the best thing she did for me was to plant the seed of 'Art' within me. She showed me that beautiful art could be found anywhere and everywhere. There were no limits as far as she was concerned. Art did not have to be on a canvas and hung in a museum.