I have always had a love/hate relationship with the aqueduct that drained the Owens Valley for real estate interests in the San Fernando Valley. This happened at the turn of the century (the 19th to the 20th centuries) It started this way; our family started making yearly trips to Lake Tahoe back in the late 1940's, and to make that journey, we traveled on highway US 395, from Mojave to the Mt. Rose turnoff in Reno. We passed Manzanar on the way and Mom and Dad told us the sad story of that place. And Dad also told us the story of the great water theft that created the huge dry lake we passed in the Owens Valley. This was once Owens Lake and the Owens Valley was home to many pear and apple orchards. William Mulholland and the water authority of Los Angeles quietly bought as many of these orchards as they could by offering lots of money for them. The orchards came with water rights, of course. And that was what Mulholland was buying. Once they enough of them they declared their intention to build an aqueduct to convey the water south. The other farmers quickly sold out as fast as they could because without water, they were doomed. The City of Los Angeles now owned the Owens Valley. This story and others are deemed fables by the pro water groups and it has become a sore subject all around.

The years went by and the trips along US 395 were more frequent as my Dad and I would go north for the spring opening day of the trout season. And there were always more stories about the great aqueduct. Then, one fall day, I went with some friends to do some Chukar hunting on the slopes above the Owens Valley and close to Ridgecrest. Driving to our campsite, we passed over aqueduct, almost buried in the ground below the dirt road. Later, I walked back to the aqueduct and followed it to a place where it was fully exposed and I stood upon it. It's very large! And standing there, I was amazed to think that this 'pipe', so full of water, was  delivering all that water, 24/7, to L.A. This part I hated. 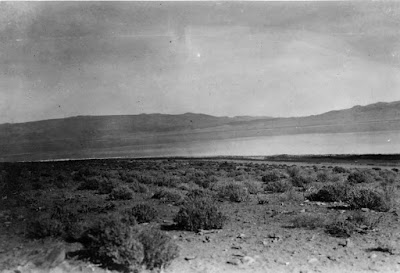 What I loved was the incredible project this aqueduct was. Men built this when electrically powered tools were non existent. This was an era of steam and mule power. They built this over rugged terrain that should have stopped them. They drilled through rock and created huge iron siphons to move the water up the hills. It took them many years, 1908 to 1913, but they were successful.

I've been collecting pictures of the construction of the aqueduct for years. Collecting helps to satisfy the ASD portion of who I am. Maybe I can pass the photos on to a curious grandchild, or maybe not. In the meantime I am enjoying the process.

In the photo above you can see Owens Lake. At one time there was regular steamboat freight service on the lake. 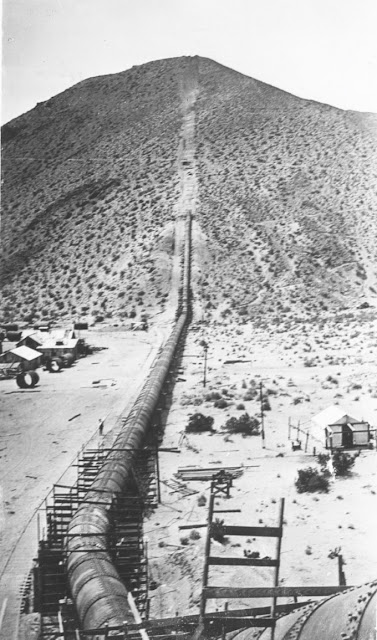 Here is a photo showing the famous Jawbone Canyon siphon. You can see a man standing near it on the left side of the huge pipe.

The 'pipe' section of the aqueduct was made by connecting short sections together by riveting. You can see the connections below. And each section was delivered by rail to a siding and then transferred to a wagon drawn by a 10 mule team. Then transferred to a custom made rail system that was constructed next to the aqueduct. That was then towed to the end and then riveted on. I've seen photos of these sections with a car inside of them to demonstrate their size.

With that amount of water being drawn out of the valley, it wasn't long before the lake was gone as well as all of the ranches.

Now, with poetic justice being done, Los Angeles has been forced to flood the lake with a very shallow amount of water because the dust that was created in the dry lake was shown to be toxic, with a concentration of heavy metals and salts. It's a very small amount of water and it only has to cover some troublesome spots and not the entire lake bed.

Go to Calisphere.org to find these photos and many, many more.

The War on America by Americans

Speaking of magazines, I just finished an article in the New Yorker, 'The Bidding War' by Matthieu Aikins. The article details the corruption in the military as they threw money away during the Afghan War. Lots and lost of money. General Petraeus called money another weapons system and encouraged the spending of vast amounts. Simple theory was that the money would trickle down (where have we heard that theory before?) and raise the living standards of the average Afghan who subsisted on less than $200 a year.

Some notes from the article; the Afghan War has gone on for 15 years. A war, and a General or two that were handpicked by the Republicans. During the 15 years, Congress has appropriated $800 BILLION dollars to pay for it. $800 billion? I can't even imagine that much money. What does it look like? A $113 billion was spent for 'reconstruction'. That's more money than was spent on the Marshall Plan after WWII.

A lot of the money was spent to hire civilian contractors to do the dangerous little jobs, like trucking, so that the soldiers would be safe. An admirable thing to do! By June of 2010 there were 107,000 contractors. Today, those contractors outnumber the troops by 3 to 1. The US spent $87 billion on contractors between 2007 to 2014.

The article is really about one trucking contractor, Hikmatullah Shadman. And as you read the article and see how much money was thrown away, you would have a hard time thinking that Hikman was guilty of anything. I know that I don't. But what I am certain of is the guilt of all the Americans that subverted that money for their own purposes. And there are hundreds; ranging from Generals to Privates. 115 US troops have been convicted of theft, fraud and etc. That's not enough. Petraeus should be doing time as well...

I don't have time for this! I'm inundated by magazines again. I do this every 4 or 5 years. I'm coasting along, reading one magazine a week. Fine. Then I see a special deal on a subscription; only $1 an issue for 12 issues! Now I have two and I'm still comfortable. Once again the "can't pass it up" subscription shows up and now I have 3; but it's also a monthly so I'm confident that I can handle it. But, I'm an artist and I spot some magazines at the Art Center and decide that I need reading material that will speak to my interests. 3 more. Then one day, my brain decides to do some searching for memorabilia and I see Hemmings...an old car enthusiasts magazine. I used to be very interested in old cars and before I can stop myself I have subscribed to 2 of their publications. Now I'm getting worried. I have stacks of unread magazines. And yesterday, a magazine, "Modern", shows up uninvited. Where did that come from? To add to the confusion, a friend keeps bringing me his used Scientific American magazines. I love them, but where do they fit in?

I don't remember where I found this article but I'm glad I did. It's an article on the rise of authoritarianism. Here is the link... American Authoritarianism
It's a lengthy article. Be prepared to read it as if it were an article in the New Yorker.

The art show is almost over and I will be taking the unsold art work home on Saturday. I was interviewed by a reporter from the Orion, the university newspaper on Tuesday morning and the article came out on Thursday; a little late to spark sales I believe. Of course there is always the chance that someone saw the article last night and has decided to visit the gallery today to buy a masterpiece at a bargain price.

There is one buyer here in town that I secretly hope (it's not a secret now, is it?) will stop by and look at my work. He is a private collector here that has donated his collection to the new Museum of Northern California Art, or MONCA. They now have a building that they are renovating and hope to have open in a few years. In the meantime, they are using 'pop up' galleries to display some of his collection and the collection, from what I've seen, is very, very nice. I understand that this collector is still collecting and looks at local offerings on a regular basis. The most expensive painting I have at the gallery is $450 and most are half that amount. I like to think that they affordable.

Since I want to continue painting 'Large' I will have to find a market for my art. I don't have enough walls in the house to display paintings that are 3'x4' at a minimum. I would have to have rotating displays and keep the excess hidden under the beds.

I have been looking at  the possibility of marketing via Saatchi Art On-Line. I think I will be able to have a good chance, or a better chance, of finding an audience for my art. Abstract Expressionism isn't the easiest kind of art to sell. And they only take a 30% commission. You can't beat that!