I have been collecting digital photos and images for a long time now. I have 32,461 of them filed and identified. I have more that have not been filed and I have hopes of getting that done before I leave. I think there must be another 10,000, scattered throughout my electronic devices. Plus, I am not through collecting them. Being autistic, it's something to do.

I just finished collecting and filing away a large trove of photos of the Saline Valley and the the industry there. First, the Saline Valley is a the location of a fairly large and very shallow salt lake. This valley is located in a very remote section of Eastern California. There is a mountain range, the Inyo mountains, between this lake and Owens Lake; now a dry lake that the city of Los Angeles sucked dry. At the time of my story here, Owens Lake was full of water and had a steamship making runs from one end to the other. 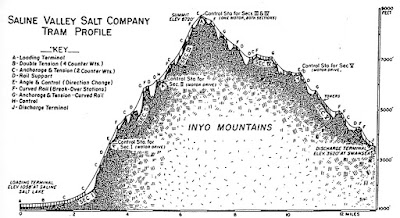 In the early 1900's, some businessmen saw a market for the salt in this remote location. No one, that they knew of, lived there and there was only one, very bad road road, in and out of the valley. But, tramways were being used to transport ore in the gold and silver mining districts throughout California and Nevada; there didn't seem to be any reason not to do the same thing with salt. There was just one barrier, the Inyo Mountains. The tram would have to climb up 7,000 feet on one side and descend 5,000 feet on the other (Owens Lake) side. To make it even more difficult, it couldn't be in a straight line. They would have to build 'Crossover Stations' wherever the tramway had to change direction. Since this was in the earliest part of the 20th century, almost everything would be hand built and built of wood. All constructed without the benefit of tools, such as saws and drills, that were powered by electricity. They also had to build 'Dead Men', which were large wooden structures that, once they were filled with rocks for weight, were designed to hold the cable and the other structures - down, and in place.  The weight of the cable, plus the salt and the gondolas, could rip the supporting structures apart when traveling down a ravine before heading back up.

The website that holds all of this history and much more, can be found at this link
It's an amazing website that does a good job of covering the story of the Owens Valley without becoming mired in the drama of the Los Angeles theft of the valley's water resources. As I said earlier, I collect old b&w photos for my personal use, and I would bet that I found 500 photos throughout the website. The photos elicit great memories for me as I have traveled up and down El Camino Sierra for many years. My Dad would take me to Twin Lakes each year for the Sierra Trout Season Opening Day. We would stop at most of the small towns along the way. He would recount to me the abuses of the Japanese Relocation to Manzanar. Manzanar is Spanish for 'the place for apples'. I doubt there are are any apple trees left. He took me to an 'upside down' Tungsten mine  just outside of Bishop, where you enter at the bottom and take the elevator to various levels of the mine. As a family, I have taken them to Mono Lake and camping at Twin Lakes. Technically, these places are not in the Owens Valley, but they are in my heart. 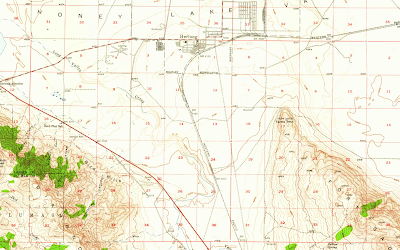 I was engaged in one of my favorite things to do this morning, looking for memories by searching through old photos on the many webpages for the Owens Valley. I came across this link for historical maps put out by the USGS. On that website they have an amazing number of old topo maps, all in a PDF format, or in XML for Excel spreadsheets. I picked one at random, a map of the Doyle, CA area, one of three. That's a portion of it on the right. It looks just like one of the paper maps of that area that I bought about 40 years ago. I guess that makes it historical, now I have to wonder, am I historical as well?
Probably not. I do remember having a large roll of these maps stashed behind the seat of my pickup truck and I would use one or another of them on most weekends, when I would be out exploring in Lassen County. If I were going to be in an area that I had no map for, I would buy it at one of the big sporting goods stores in Reno. If I couldn't find it that way, I would send away for it at the USGS headquarters in Washington, D.C. I would usually buy two or three maps of the adjoining areas, just in case! My collection of maps grew steadily, and more and more fragile as the years went by. I used a lot of cellophane tape on those maps, just to keep them useable.
The downloads are  very fast and are free. I have not tried pried printing them, in any case, I don't have a large format printer, so the best I could do would produce legal sized map. Still, that's all I need for my travels while sitting on this couch.  Here is the link again...

And that would be me. I wish it wasn't true, but I do tend to see everything in a critical light. It's part of my deep cynicism and yesterday that criticism was being projected at some 'artwork' at our local community art gallery. It was a new show in a yearly series, where 3 artists are given gallery exposure for perhaps the first time. This years artists were certainly different from what we have seen in the past. One 'artist' had suspended 8 sections of a white picket fence gate from the ceiling. They were parallel and about 3 feet apart. They were about 5' long and had hinge and latches on them; they were suspended so that they just touched the floor. There was no explanation for them. They simply 'were'. A second artist had used quotes from famous people and had pasted marked up photos onto dinner plates. The images were supposed to be a comment on the quotations. There might have been 10 of the plates hanging on a short section of the wall. The images and the quotation combined were very humorous, but that is all that they were. Another artist had used colored pencil to draw homoerotic images of himself. He had great skill in his use of colored pencils. But,  I saw far too much of the artist and nothing that showed skill in the making of art.

I know that criticising art is dangerous...but someone has to do it!