I am an artist and have been painting for close to 20 years now. I like acrylics and I have done some watercolor work. Lately, because of my aches and pains, I have given up the use of my easel as I can't stand as long as I want to. More recently I have been using colored alcohol ink marking pens to satisfy my artistic urges. For the past 10 years I have been painting with a group of artists every Tuesday morning, meeting at the local art center. We talk and critique each other's work; if we want. I happen to be the only male in the group of 9 but that's not a problem. After all, we are quite civilized. Besides being the only male in the group, I am the only expressionist/impressionist/abstract painter among them. The women are all watercolorists,yet, despite all the differences, we all get along just fine.

So much for the background; on to the story. Some time ago I was talking to the manager of the center and, just for fun, mentioned that it would be great if we could use the two bathrooms as a gallery to display our paintings. The bathrooms are quite small and someone at some time had hung 4 or 5 large paintings on those walls. I thought we deserved some equal time and space. She was sympathetic but couldn't give me an answer. Two weeks ago she saw me and told me that the large (and ugly) paintings were gone and the walls were being painted for us. I told the group and found 3 others that wanted to show their art. We picked names out of a hat and I was lucky enough to get the first show which we had decided to call Masterpieces of the 'Loo'. It was just a fun kind of project.

I wandered the house and found 6 paintings, 3 per bathroom, that had not sold before. Afew were on our bedroom wall and the rest were in a closet. I hung them carefully, wanting whoever was sitting there to have a chance to contemplate them. A week has gone by and yesterday I went into the art center bathroom and saw that one had sold! I had used some card stock to scribble down the name of the show and the price, plus my website address. I had plucked the prices for each out of the air and used my imagination. They were all priced at $150, whether they were worth it or not. Apparently, someone sat there long enough to appreciate that particular painting; one that I had completed in 2012. One that had been in at least 4 shows. And one that had been on our bedroom wall for many years. I had made the frame from scrap wood and gone to Lowe's for a piece of 2'x2' 1/4" birch plywood and some 3/8" wooden base material to trim the frame. I had nailed it all together and given the plywood 3 coats of gesso before painting on it.

I have a feeling that Masterpieces of the 'Loo' will be become very popular and many artists will be eager to secure a 3 week showing of their art  in a 5'x8' bathroom. 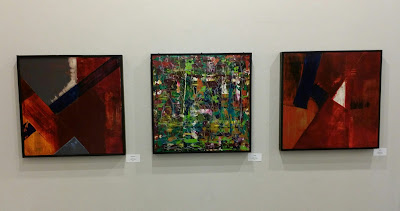