So much has happened

November, December and now January. All passed without my posting a thing. I just took a look at my last few posts in 2018 and I can now see where I have to pick up.
In November (and December) I was just going through the motions. My pain was constant and not controllable. I was taking drugs and using a nebulizer to help with my COPD. Christmas came and went and during that time I resolved to join the patients at the Pulmonary Rehab center at the Enloe Hospital. Also during this time in November, the Camp Fire started in Paradise. This mountain town is just 30 minutes away by car and about 10 minutes in a straight line. We had spent a week or two  looking for a house in Paradise before getting smart and moving to Orland. We had seen all the narrow and twisting roads leading to houses with great views. We were tempted, and then we remembered our friends in Janesville, where we first lived in N. California. These friends were members of the US Forest Service and CDF, the California Dept of Forestry; now Cal Fire. They all lived away from the forest and out on high desert land just to the north of our forested land. We had a house on 8 acres of trees and there was only one paved road out of there. They warned us of the dangers. We remembered that about 30 years later.
Back to November...The fire started in the morning and we saw the large plume of smoke almost immediately. Looking to the south/east that plume soon blotted out the sun. By mid afternoon we had to turn all the living room lights on. The news reports were very sketchy and the reporters were very nervous. Soon the fire swept through Paradise and continued heading north towards us and east to complete the devastation of Paradise. I stayed by the television all night and into the early morning, watching and listening the progress of the fire. At one point the fire came into Chico, about 6 miles away from us and so I was not going to go to bed. We had all of our important papers out of the safe and ready to put in the car. 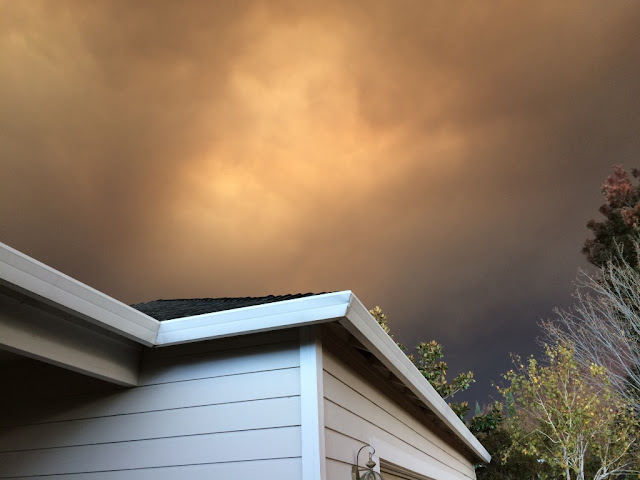 This picture was taken looking over the corner of our garage at 3 in the afternoon. We were scared. We are both from Southern California and know all about wildfires and how fast they move. We have been scared before. I once watched a smoke plume in the distance turn into a menace within an hour. I had to tell my crew we had to leave before it got to us. As we got on the freeway, the CHP officer told me not to slow down and don't stop for anything. I passed a truck drivers trying to push flaming bales of cotton off his trailer. The center divider was burning and smoke was thick. Once clear, I headed home and as I drove into the Valley, I could see smoke and flames on the ridge to the north. That fire raced along the ridge and turned south, I met it again at the far end of the valley after driving for 30 minutes. I got through the smoke and the flames continued on into Malibu and down to the sea.
Here, the Camp Fire was finally contained after days of no progress. Air tanker flights were almost continuous over our house. But once contained, the damage was being assessed and it was monumental. 86 people died in terrible ways. Most were elderly as Paradise had always been a retirement community and housing had been cheap. Infrastructure was almost non-existent here and roads and houses had often 'just happened'. There were no sewers and water service depended on a community lake/reservoir. They had a police dept and they contracted their fire protection to Cal Fire, as many small towns here do. And Cal Fire had always been worried about this town. They saw it as a disaster waiting to happen. Yet, there was very little they could do to change things.
Now the fire is out but there is a new slow moving disaster happening. The City of Chico grew by 20,000 homeless citizens overnight. Most have moved on to friends or relatives. Making new lives. Some were able to buy houses in the area, but very few were available. There are about 600 to 1,000 people left living in tents, cars or campers, all in the County fairgrounds. The Red Cross said they were through and now local agencies are struggling. Traffic is horrendous. Shopping is difficult.
Yes, a lot has changed and it continues.